Perspective: The Key to Fun! 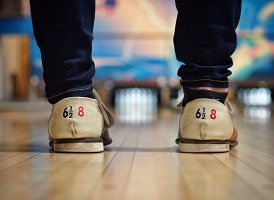 Photo by Benjamin Faust on Unsplash

In the fall of 2016, I became a substitute bowler on my husband’s Monday night team. Hanging out with the guys every once in a while, yucking it up, sharing stories, eating pizza, and drinking the occasional beer was fun—until I lost my perspective.

I enjoyed subbing for the team even though I’m a consistently inconsistent bowler. My average is a steady 135, which isn’t bad for a 5’4″ woman who weighs the same as her average and only rolls a ten-pound ball.

In 2018, I became a regular team member, a 30-week commitment from September to April. Suddenly, my measly 135 average was no longer good enough for the perfectionist in me. Bowling a 169 followed by 105 and 131 was embarrassing. If I wanted that kind of up and down experience, I could stay home and do the hill workout on my stationary bike.

So, I did what any perfectionist would do. I hired a coach for a few lessons and watched bowling how-to videos to improve my game. I even practiced during the week. I had so many strikes and spares that my average jumped from 135 to 160. I was still inconsistent but at a higher level. The perfectionist was thrilled with my progress.

Unfortunately, those strikes and spares faded away, and by the end of the bowling season, my average had slid back down to match my weight. My opinion about the game plunged even further.

I told my team captain (husband Ron), “I’m done tossing this heavy ass ball down that ridiculously long lane to knock down a bunch of stupid pins that refuse to fall. Bowling is not my passion, and I’d rather be at home writing. Please take me off the team and Spare Me this humiliation. Pun intended.”

“The boys are gonna be disappointed,” Ron replied. “They like bowling with you. Think about it over the summer. Don’t make a decision now.”

I didn’t want to leave the team, I enjoyed their company, but bowling every single Monday night had sucked the fun right out of me.

In August, we took a vacation to the Field of Dreams movie site in Dyersville, Iowa. I bought a baseball player bobblehead displaying the words “Go the Distance” to remind me that I am a strong woman who never gives up. I was referring to writing, though—not bowling.

We always take our bowling balls with us when we travel, so we stopped at the Cherry Lane Bowling Alley in the Diamond Joe Casino in Dubuque on our way home. My first game was vomit-worthy. By the second game, I didn’t care anymore. I just tossed the ball; it grazed my calf, and low and behold—I got a strike!

“Woo Hoooooo!” I shouted, raising my arms in the air as I did a happy dance back to where Ron stood with his hand at the ready for a high-five.

Bowling suddenly felt GREAT again, but strikes can’t be trusted. Even the best bowlers don’t get them every time, and mine was a fluke. Even so, the endorphins coursing through my body felt FANTASTIC. Was it the strike that changed my mood for the better, or was it my positive over-the-top reaction?

Then it hit me! I’d been down on myself because I wasn’t bowling as well as I thought I should, but what did it matter?  It wasn’t as if my score would stop climate change or a meteor from crashing into the planet. Bowling would never be more than a game to me; why was I getting so bent out of shape?

I had a choice to make. I could take more lessons, but why waste time and money? I could continue to feel sorry for myself, but pity is a bummer. There was only one solution that felt right: change my perspective about bowling.

An inspired idea popped into my head. What if I did a happy dance every time I threw the ball, no matter how many pins fell over or if the ball wandered off into the gutter?

The next ball took down only one pin. I Cha-Cha’d all the way back to the ball return with a smile on my face.

“Okay Ron, here’s the deal. I will bowl again this season as long as the guys understand that I’m going to shimmy and shake up and down the lane no matter how awful I bowl because I’m NOT going to spend three hours every Monday night in a funk. It’s killing my joy.”

He grinned, “After what I just witnessed, I’m sure the entire league will be okay with you shimmying. I know I will.”

Then, out-of-the-box ideas began to manifest. I shared them with Ron, his eyes glazing over as I talked. “I could post on Facebook that I’m doing this big experiment about staying positive no matter how poorly I bowl. OH! I could post my scores and report on my attitude every week. I could write a blog post about the experiment or write an article for a bowling magazine! There are so many possibilities!”

I danced during every frame. I did the Rumba, the Salsa, the Twist, the Swim, the Monkey, and the Floss, which I’d recently learned from one of my grandchildren. If only you could have heard the music in my head; it was POSITIVELY infectious.

Overall I didn’t bowl any better, but emotionally I felt better. Physically, my knees were on fire! Dancing up and down the lane was a ridiculous idea. What had I been thinking?

“I have a new deal for you,” I announced. “I will bowl this next season, as promised, but there won’t be much dancing unless you’re willing to carry me to the car—which you may have to do today.”

Lucky for me, one of our substitute bowlers, who has a 218 average, asked if I was interested in sharing my spot on the team with him, taking turns bowling every other week. “YES!” I replied in all caps to his text message.

Alone, every other Monday evening, I wrote to my heart’s content. When it was my turn to bowl, I refused to think negatively about my performance, so I Woo-Hoo’d no matter how many pins went down!

In March 2020, the league ended their season four weeks early when Covid-19 shut us down. That fall, with no vaccines and a resurgence of Covid cases, only a few teams were willing to bowl; ours wasn’t one of them. In September 2021, the league disbanded and my commitment to bowl for eight months every year was officially over. Yay!

Ron and I now bowl whenever we want at a bowling alley closer to our house. It’s bright and colorful with lots of positive, fun energy! 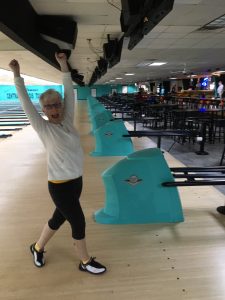 « The Little Flipper | The Night Before Christmas Open House »