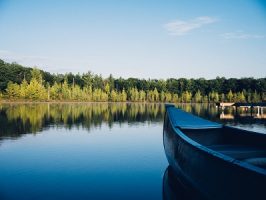 Photo by Aaron Burden on Unsplash

“No, Tim! No!” Ron hollered as he, and his best friend, flew out of the boat, splashing into the hot ditch near the Sangchris Lake power plant like lobsters tossed into a pot of boiling water.

Earlier that day, Ron and Tim had been busy cleaning their boat trailer wheel bearings in our garage in preparation to tie their boats together, watch the sunset, and fish until midnight at the lake.

Sea Weed, our 14-foot Aluminum Sea Nymph V-hull boat, was only 3 feet at its widest point. It was more like a wobbly canoe, especially for anyone standing in the bow of the boat, and it only had a 5-horsepower 1950s Sears and Roebuck’s motor.

Tim’s stable 14 foot V-hull Alumacraft was 6 feet wide at its widest point. His 25-horsepower 1979 Johnson motor was four times faster than ours. Tim would literally drive circles around Sea Weed, laughing the whole time, as Ron patiently putt-putted across the water. Tim’s ritual reminded me of Aesop’s fable The Tortoise and the Hare, except we never won the race to the fishing spot.

The fellas jacked-up Ron’s boat trailer in the garage, adding jack stands for stability, then removed the bearings, cleaned, regreased, and repacked them. They repeated the process with Tim’s trailer, but his bearings were too worn to reuse. They went into Springfield to buy new ones, but none could be found to fit Tim’s wheels after several hours of searching.

Disappointed but still wanting to be on the water, the guys made a decision. “Tim is going to ride with me in our boat and leave his truck here,” Ron announced. “Do you still want to come with us?”

I quickly calculated my weight, 130-135, depending on my chocolate intake. Ron was about 180. Tim was—hefty. It wasn’t the total weight of three adults in our boat that concerned me; it was the unbalanced weight that gave me pause.

I knew from experience they would be on the water until well past midnight, so when I heard Ron backing the boat into the garage around 1:00 am, I went right back to sleep.

On my way to the kitchen the next morning, I stopped cold at the laundry room. On top of the washer and dryer, in neat rows and sopping wet, lay Ron’s wallet, driver’s license, credit cards, insurance cards, keys, pocket knife, gum, coins, and a slew of ones, fives, and twenties.  What on earth?

I rushed to the garage. The boat was devoid of everything: the oars, tackle box, fishing rods, fire extinguisher, whistle, flashlight, medical kit, the small plastic flask of adult brew, and the 15-pound anchor—all missing. Only the portable fuel tank connected to the motor, the 10-pound anchor, and several inches of water, nestled in the V-hull, remained.

This is Their Story

Tim: So we’re in the hot ditch where the power plant discharges hot water when generating electricity. Of course, for us, as usual, it’s just fishing. It’s not catching.

Ron: It’s about 11:00 at night. There’s a full moon shining bright. It’s one of those clear nights, but as the temperature dropped from the heat of the day, it created this steam bank about two or three feet tall on top of the hot ditch where we anchored. We couldn’t see the water because there was this cloud of mist hovering over it.

Tim: I was sitting in the front of the boat and decided I needed to ah, get rid of some of the liquid refreshments that we were enjoying, and I said, “Ron, don’t move. I gotta pee.”

Now, the boat isn’t very stable. I’ve got my foot on one of the gun wails, doing my business when Ron shifted, and then I shifted, stepping backward, which caused the boat to start tipping. I tried to jump out, but my hip caught the side of the boat, and I hear Ron holler, “No, Tim! No!”

Ron:  I’m flying through the air with my arms and legs spread-eagled, and then, splash, I’m in the water. The boat is upside down. Everything in it is on the bottom of the lake or floating away, including the life jackets.

If that wasn’t bad enough, we had five fishing poles in the water when the boat flipped over, and we’re tangled up in the lines. I quickly pulled out my pocket knife, cut us out of the cobweb, and we each grabbed a life jacket before they got too far away.

Tim: The water was so hot that sweat was pouring down our faces. It felt like we were being cooked alive. We kept trying to push the boat to the bank, but we were dragging two anchors, and the current kept taking us right back to the middle of the hot ditch.

We’d been in the hot ditch for about 30 minutes trying to figure out what the hell we’re gonna do. We were exhausted from the heat and getting more tired by the minute. I thought about cutting the anchor line, but then we started talking about leaving the boat and swimming to the shore. It wasn’t far away; we could see the outline of the trees through the fog. At least we’d be out of the water and could follow the shoreline back to the dock.

Tim: But, I’m concerned that if we start swimming, Ron will have a heart attack because of his age, and Ron is worried I’m going to have one because of my weight. Even so, we were just about ready to leave the boat behind when I see the light of another boat and start whistling as loud as I can. The people in the boat couldn’t see us because of the steam on the water, so we’re yelling and banging on Ron’s boat with our hands to get their attention. And then we hear their motor rev up, and their light is getting brighter.

Two guys and two gals show up in a big old 10-foot wide catfish flat bottom boat. It’s just what we needed. One of the guys hauled me up into the boat like I was a beached fricking whale. I didn’t drink beer at the time, but he offered us each one. We took it. It was cold. It was wet. I sucked the whole thing down.

Ron: What a strange sight to see my boat being towed upside-down with her motor underwater, her shaft sticking up in the air, and the 10-pound anchor sitting on her hull.  The further we got from the hot ditch, the mist on the water disappeared. Tim and I were sitting on their fishing platform, in the bow of the boat, soaking wet in the cool night air, shivering all the way back to the dock as we watched a parade of our lightweight shit from the boat floating down the canal.

At the dock, they untied the boat. Tim and I got in the water and pushed it toward the concrete ramp. It was light enough for us to lift it and turn it over, but there was still a bunch of water left inside. We said our thank-yous, and they went on their way.

I have no idea what happened to the 15-pound anchor. It wasn’t attached to the boat when we turned it over.

Tim: So, we’re sitting on the dock, talking about the magnitude of our experience and how we could have died out there, when Ron’s plastic flask comes bobbing down the canal toward us.

Ron: As I recall, it was Absolute Vodka. I held my hands out and said, “Come to Daddy,” and it floated right to me. It was a Godsend. We took slugs out of it until it was all gone, celebrating that we were still alive.

Tim: And we lamented the loss of our poles and tackle boxes with that warmed vodka, too.

Ron: When we walked up the ramp to get the Jeep and trailer, we were still soaking wet. The air was downright chilly. I always carry spare clothes with me, but they were too small for Tim. I changed into dry clothes, gave Tim a blanket, and then we backed the Jeep down the ramp and hooked up the boat.

On the way home, I wondered how I was going to explain this to my wife. Lucky for me, she was asleep, and I didn’t have to tell her what happened until morning.

Tim: I got in my truck the next day, and my driver’s seat was still wet from my clothes. Several years later, I was out fishing with my friend and her son. She looked in my tackle box and said, “Wow! All this stuff is new!”

“That’s because the one I used to have is on the bottom of the Lake Sangchris, somewhere in the hot ditch,” I explained.

Gaye: The next day, when I told my co-worker, Sharah, about the fishing incident, she suggested a more appropriate name for the boat, and ever since then, even though we no longer own Sea Weed, she is affectionately referred to as “The Little Flipper.”

If you enjoyed this tale, Subscribe below to receive the next story via email.