The Night Before Christmas Open House 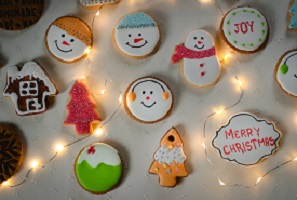 Photo by Yulian Karadzhov on Unsplash

Have you ever lived in a house owned by a church? Many years ago I was married to a minister; we lived in five church-owned homes. One was perfect, the others, well, let’s just say they had issues and that’s where the Christmas Open House steps in. But first, let me tell you about the houses.

Our first parsonage was built in a coal mining community in the late 1800s, and even though it was the 1970s when we lived there, it still had no closets or heat in the bedrooms. Brrr!

The second parsonage was my dream home; a spacious two-story, with four bedrooms, a finished basement, a nice backyard for the children, two bathrooms, a large living room, a separate dining room, and it was relatively new. I could have spent the rest of my life there, but we moved two years later.

Parsonage number three had a large, but outdated kitchen with a 5-foot-wide “antique” cast-iron sink and drainboard attached to a white metal cabinet on the east wall next to the door of the unheated back porch where I did laundry.

A newer refrigerator sat alone on the north wall. The 1950s stove was by itself on the west wall, and the 6-foot wide cupboard for dishes and food, built out of plywood, was on the south wall. I counted all the walking to prepare food in the kitchen my exercise routine.

The fourth parsonage was a lovely two-story older home with a large living room, dining room, four decent-sized bedrooms on the upper level, and a bathroom with a classic clawfoot tub—but no shower. The kitchen had been extended onto the back porch making it big enough for the washer and dryer, but it had plywood cabinets and laminate countertops with metal around the edges just like the last house.

There was a second bathroom off the kitchen where the previous minister’s wife stored her potatoes. Why?  because it had no heat!  We had to be pretty desperate to sit on that toilet seat when the cold north wind howled in January.

Our bedroom in the fifth parsonage had a closet with a 30” wide door. That’s less than a yardstick wide. The only other place to hang our clothing was in a closet built on the front porch which had been closed-in with a dozen storm windows, no real windows, and no heat! Every morning from November to March, I’d grab my coat and hat from the old-fashioned stand-alone coat rack and bundle up for my run to the Arctic closet, where I quickly grabbed clothes before I got frostbite.

By the time we lived a few years in this last parsonage, I was fed up with having no control over my living situation, so when our annual Christmas open house drew near, the last thing I wanted to do was bake cookies for church members. Instead, I sat down at the kitchen table and did what I usually do when I’m annoyed—I write.

As my frustration spilled onto the paper with heaping spoonfuls of exaggeration, I began to laugh. My grievances had felt so serious and important only minutes earlier, yet now those same issues were handing me an idea for a cute Christmas Open House poem based on those housing experiences. Had I lived those 20 years in that perfect dream house, this poem would never have been written, and to this day it still gives me a satisfied giggle. Enjoy!

Twas the night before open house
at the minister’s abode.
The house needed updates.
Church members were told.

The curtains still hung
twenty years on the wall.
The carpet lay bare
where it ran down the hall.

The children shivered
and shook in the cold,
for the windows were cracked
and the furnace was old.

when up from the basement
we heard a commotion.
We sprang from the sofa
and set right in motion.

Away to the basement
we ran in our fright,
threw open the door
and flipped on the light.

And what to our eyes
did we then behold?
A moving blob
of slimy green mold.

It crawled in the washer.
It crept up the dryer.
It rolled by the furnace
growing wider and higher.

It raced to the stairs
as if it was lightning.
We bolted the door;
it was so frightening.

Then into the kitchen,
right under the door,
it slipped in the house
and slimed the floor.

It slid through each room,
as if it could see
leaving the house
with gooey debris.

Then up on the table
it crept like a louse,
devouring the cookies
for my open house.

With hunger subsided
it rested all night,
and still hadn’t moved
with morning’s first light.

We slept on the counter
and stayed there all day
’til the church folk arrived–
their visit to pay.

“You can’t live like this!”
they exclaimed one and all.
We’ll build a new house
and this time we won’t stall.

So into a new home
my family settled.
And I paid the slime man
for wares he had peddled.

« Perspective: The Key to Fun! | On the Farm with Grandma Rose »