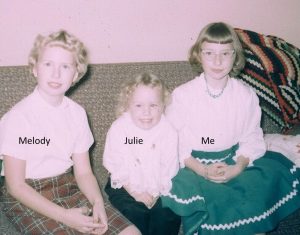 Thank you for joining me! I’m a middle class, middle child, middle manager who writes about finding balance and humor as I navigate the highway of life in the middle lane.

I grew up sandwiched between two sisters.  Melody, the oldest, was the rule maker.  Julie, the youngest, the rule breaker.  I was the team player who organized the rules and made sure everyone got along.

My idol was Pollyanna from the 1961 Disney movie by the same name.  The ultimate optimist who, after losing the use of her legs in an accident, was still able to lift the spirit of an entire New England town. What a gal!

My birth order placement formed the foundation for my interpretation of the world. I’m friendly, open minded and readily accepting of others while at the same time way too serious and hard on myself. I avoid conflict with a smile, which is why my face hurts and my teeth are perpetually clenched.

Putting my suppressed thoughts to paper is the next best thing to actually breaking rules.  Writing allows me to exaggerate the situations and the people in my life until my jaw relaxes and I snort with laughter at my own stinkin’ thinkin’.

I never expected to be a writer, especially one who writes humor, but my old pal Positive Pollyanna obviously had other ideas. I’ve been told that my stories are amusing and encouraging so I started this blog to share them. Honestly though, putting my thoughts out here for the public to read scares the bejeezus out of this middle child! I’ll have to write about that.

Other Tidbits About Me

I was stunned at the age of 14 when I discovered I had a talent for writing rhyme!

I never finished the book I was reading for a high school speed reading course.

I wasn’t a reader until age 21 when I was home alone all day with my first child and 500 miles away from family and friends.

My first husband was a minister. We met in a college music class. When he proposed I thought I was I going to marry a high school music teacher. The day after the wedding I watched him behind the lectern preaching to his new congregation, while I sat alone in church wondering what the hell happened.

Before we had children we had a music ministry and recorded two albums. One of them (albums, not children) recently showed up on eBay for an opening bid of $6.95.

Ron, my second and LAST husband is a retired Navy man. We met in a college writing class. College is my “go to” place for finding romance!

I did not plan to have my humorous stories about being a minister’s wife published in the local newspaper in the late 1980’s.  The opportunity took me completely by surprise.

Twenty-two of my short stories and non-fiction articles were published in newspapers and magazines before I returned to college at the age of 36. I graduated two years later with an English degree, exactly 20 years after completing high school. My children were 17, 14 and 10 at the time.

I started writing music in 2012 after realizing the only reason I couldn’t write music was because I kept telling myself I couldn’t.

I save stamps and specialty quarters. I don’t do anything with them, I just save them.

I’ve been a Trekkie since the original series went into syndication.

I’ve been in the audience of the Jerry Springer Show!