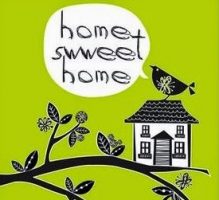 Damn birds! I knocked their house off the front porch light with a broom then hosed off their leftover building debris for the second morning in a row.

I looked for eggs first; I’m not heartless. Plus there’s a federal law that forbids disturbing an occupied nest. Not that any of my neighbors would report me, but one never knows.

The question I ask myself is, “when do these birds build their nest?”

After I demolish their handy work they disappear for the day. They’re probably pissed at me and regroup for their next attack, because by 5:00 the next morning there’s another nest that’s bigger and stronger than the last.

Do the expectant mom and pop have engineering degrees or do they bring in reinforcements from the Audubon society? Maybe they’re a flock of organized terrorists who don their night goggles and covertly sneak onto my porch at midnight to vandalize my property. Or perhaps they’re an educational group who after their 4:00 a.m. worm-out, gather at my house to film their Reality TV Show Nest Quest. Their slogan: if she comes, we will rebuild.

As I wound the old duct-taped garden hose onto the reel next to the downspout at the corner of the garage I wondered how I could evict this fowl society from my porch. Then it hit me. Duct Tape!

I scurried to the garage, grabbed the tape and headed into the house for my sewing basket. I pushed straight pins through the sticky side of the tape (my version of a bird spike) and stuck it on the bird’s job site, that area between the porch light and the siding.

“I’ve got you now!” I sneered, shaking my fist in the air. “You can’t build a house on pins and needles!” If I’d had a mustache I would have twirled the ends.

The next morning I opened the front door to find a disaster area. Muck and mud, dry grass and twigs had been shoved between each straight pin creating a solid, but messy foundation for their brand new three story penthouse!

The porch floor and walls looked like they had celebrated their housing project with a mud wrestling party, then tried to cover it up with the dry prairie grass I never got around to cutting down in the fall.

So far my attempts to thwart these feathered frustrations had yielded zero results. It was time to think outside the nest.

Two years earlier I had purchased an 18 inch horned owl decoy that I attached to the deck in the back yard as a bird deterrent, but the birds in my neighborhood aren’t stupid. They wear tactical gear and host TV shows. Their favorite pastime was to shit on the owl’s head.

What I needed was an enemy that would stop them in mid-air as they swooped in with their construction material; something small that would signal danger the moment they got close to the porch.

I went to the spare bedroom closet where I stored some of my children’s old toys and found just what I was looking for. Coiled into a striking pose was the green rubber snake we purchased at a souvenir store in Gatlinburg three decades ago.

I arranged the reptile on the porch light with its body wrapped around the finial (the pointy thing on top of the light). Its head, with teeth showing in it’s open mouth, faced toward the yard, it’s green tail dangled down in front of the white siding. The visual screamed “SNAKE! SNAKE! SNAKE!”

It was cloudy when I opened the front door the next morning. For the first time in three days, the porch was devoid of squatters. My heart soared. I turned my face to the sky, stretched my arms out in delight and smiled.

As I celebrated, the clouds parted and a golden ray of sun lit the gutter at the corner of our garage. And there, twenty feet away from the porch, Momma bird glared at me as she sat on her eggs in her very simple nest, under the eave, in the snake free arm of the downspout.

« The Fruitcake Affair | Teenagers In The Wild »