Teenagers In The Wild 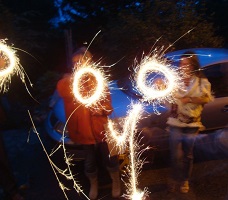 It was not our intention to spy on our daughter and her friends. Honest! It was a fluke. A chance coincidence. A July 4th opportunity we couldn’t pass up!

We were sitting in our Jeep in the driveway after returning from our local 4th of July fireworks when Karen’s boyfriend parked his Bronco in front of our house. Karen, her girlfriend, the boyfriend and his male cousin piled out of the vehicle and congregated around our front porch.

We watched in silence for a few minutes, thinking they would eventually go into the house, but the weather, a comfortable 80 degrees with a slight breeze had relieved the sticky humidity of the day, keeping them outside to discuss what activity to do next.

I leaned closer to Ron in the driver’s seat and whispered, “Should we just exit the car to let them know we’re here?”

He put his right hand on my knee and with his bass voice hushed he replied, “This is a rare opportunity to watch teenagers in the wild. We’re gonna slowly move our seats back so they can’t see us through these open front windows.”

We adjusted our seats, then reclined the seat backs so our heads were just below the half-opened, tinted backseat windows. The unsuspecting adolescents had no clue to our presence as we turned our dark blue Jeep Cherokee into a teenager observation blind and with baited breath waited to see what they would do.

Behavior 1
“I know!” Cousin shouted as he ran to our mailbox by the street. “I have cherry bombs. We could set them off in the mail box.”

Daughter ran after him screaming, “NOOOO!”

Grabbing his arm, she pulled him away. He stumbled, falling backward in the grass. Standing over him with hands on hips and a threatening scowl on her face, she roared, “Are you nuts! That’s our mailbox! What’s wrong with you?”

Behavior 2
“I have sparklers in the house,” Daughter announced. “I’ll go get them. Everyone stay out here.”

Observation: Daughter is obviously the leader of her pack. (Wow! Who knew?)

Behavior 3
Cousin’s lighter is used to light sparklers. All four teens run around the front yard waving their sparklers, drawing circles and writing their names in the air.

When the sparklers fizzle out, the girls each light another one. Daughter raises her left hand above her head and with her right hand she moves the sparkler in a circular motion then lunges forward at Girlfriend, shouting, “En Garde!”

Males watch with amusement, as females thrust and parry across the yard to the driveway. Ron and I freeze as they circle two times around the Jeep. They are so close we could have reached out the window and scared the bejesus out of them.

When the second sparklers die out, the girls head back to the boys on the porch.

Observation: As expected, teens are less inhibited and more playful when they think adults are not around. (hehehe)

Twenty minutes had passed since the kids first arrived. “This has been fun,” I said to Ron, “but now I have to pee. How are we going to end this?”

A sly grin crossed his face. “I have an idea.” He pointed to his foot as he lightly pushed the clutch in for half a second. When the Jeep rolled a couple inches backward down the drive, I punched Ron lightly in the arm, mouthing, “You stinker!”

Behavior 4
The kids had been too involved in their conversation to notice the movement so Ron did it again.

Girlfriend jumped up from the porch shouting, “The car just moved!”

The others stared in our direction. “You’re seeing things!” Boyfriend said.

“No. I swear. It moved backward. I saw it!” insisted Girlfriend.

Daughter stood up and stared at the Jeep. “It’s not moving,” she stated, but when she sat back down she kept glancing at the driveway. It was all we could do to keep from laughing out loud.

Ron waited a couple minutes and engaged the clutch again moving us another two or three inches before stopping.

“I just saw it move!” Daughter hollered leaping off the porch along with her friends in a mad dash to stop what they thought was the Jeep rolling down the drive.

It was time to show ourselves. We nonchalantly stepped out of the Jeep.

“You can stop saving the car now,” Ron said.

Four stunned faces stared at us.

“Where did you come from?” Karen questioned.

“But…?” Karen’s face was a shroud of confusion.

“You sparkler fought right next to us,” I explained.

“Oh, my gosh! I’m so embarrassed,” said Girlfriend, her hands on her cheeks.

“You saw everything?” Karen asked. I could see the evening events replaying behind her eyes.

The six of us had a good laugh about our unintended trickery. Then the kids piled back into the Bronco and headed to the carnival where we couldn’t spy on them – or so they thought!