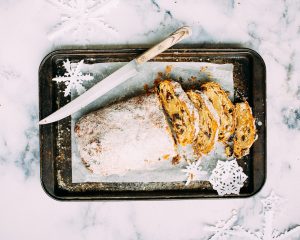 After hearing disparaging stories about the fruitcake’s shelf life of 100 years, I never had a desire to try it until I discovered mini loafs of the seasonal concoction in my grocery store a few years ago. It was that first loaf that started the whole sordid fruitcake affair.

The initial taste was heavenly. Each mouthful was a myriad of flavorful sensations: nuts, candied cherries, raisins, pineapple, orange peel and rum, all in one scrumptious bite! The infusion of this candied nectar created a yearning for more. I sliced piece after piece of this succulent treat until the mini loaf was gone in a couple of hours.

Sugar is my down fall. One tiny bite of processed sugar can start me on a binge. My husband, well aware of this fact, hides his candy bars. He saw the last slice of fruitcake vanish into my mouth when he walked into the kitchen.

“You ate that already? Isn’t it horribly sweet?” He asked. His eyes grew wide as he considered the safety of his most current candy stockpile.

“Your chocolate’s safe,” I assured him, licking a morsel of candied fruit off my lip.

I wasn’t lying. Why would I want chocolate when it’s FRUITCAKE season?

The next day I bought two small loafs and put them in the refrigerator. My logic was that if I didn’t see them every day on the kitchen counter, I would savor them over a longer period of time; like one loaf every week instead of one every afternoon.

My husband wasn’t the only one who was concerned about my earlier pig-out session. How many pounds would I gain if I ate these two loafs as fast as I’d eaten the one the day before? I opened the refrigerator door again, moving the cakes to the veggie drawer where they wouldn’t be as readily visible or accessible nestled between the kale and spinach.

I finally stuck my head in the refrigerator, discreetly unwrapped one of the loaves and took a bite, then another and another. Yum! It’s truly amazing how fast a person can eat without time consuming utensils.

My lack of restraint was appalling. I removed the second little loaf from the veggie drawer, shoving it under a chuck roast in the freezer. My logic this time was, if the urge to eat fruitcake struck me again, I would have to wait for it to thaw first. I completely underestimated my ability to eat it frozen.

Out of sight, the fruitcake was out of my thoughts until I pulled the roast from the freezer and there it was in all its sweet glory. I put the fruitcake on the counter to thaw, but it wasn’t thawing fast enough. I pulled out my trusty frozen food knife; the one I bought thirty years ago when Aldi only sold hamburger in frozen 5 pound tubes.

Fruitcake is dense and heavy. When frozen, it’s like cement. The knife was useless. All I got was a few frozen slivers that slowly thawed on my tongue. I waited 30 minutes until an 8th of an inch around the whole cake was thawed. The knife still wouldn’t go through the center.

I couldn’t wait any longer. Picking up the fruitcake with both hands, I chewed off all the thawed sections, right down to the frozen core and then some! When I looked at the gnawed and gnarly frozen cake my first thought was, who’s the fruitcake now?