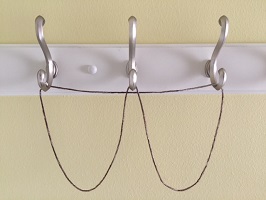 I tossed the circle of string into the air where it snagged on the left hook of the coat rack in my bedroom, like a pair of panties flung during a passionate movie scene.

The string fling was an experiential writing class prompt to inspire a personal story about one’s life; toss the string and tell a story about what it lands on, the shape of it, or the exercise experience.

My first thought was passion and panties. Could I write about that? Sadly, the only airtime my undies saw was when I hurled them into the clothes hamper. No story there.

I rearranged the string, looping the dangling part onto the far right hook. The parallel strings reminded me of the Cheshire cat’s grin. I shivered. Creepy Cat! No thanks.

Taking hold of the cat’s lower lip, I slipped it up and over the middle hook, then pulled the excess string down between the hooks into two large hanging loops. When I stepped away, two sagging breasts stared back at me.

“I can’t write a story about breasts!”

Needing fresh eyes, I corralled my children into the bedroom and informed them of my writing assignment.

Michael (16) added, “I see a string hanging on three protuberances.”

We stared at him, mystified. Protuberance? I knew what it meant, but how did he?

A self-satisfied smirk grew on his face when he confessed, “It’s a new vocabulary word.”

“I’m impressed!” I said, patting him on the back.

“What else do you see?” I asked my advisers.

“Could be two airplanes nose to nose in a race,” said Andrew.

“Or a kneeling woman wearing a skirt,” offered Karen.

I didn’t believe for a moment that the boys were not seeing breasts, so I pressed on. “Was there something you thought of, but hesitated to say out loud?”

Karen moved closer to the string, studying it. Andrew, lifting one eyebrow like Mr. Spock, chuckled. Michael lowered his eyes to the floor and snorted in his attempt to not laugh.

“Ah-Ha!” I shouted, pointing my finger at them. “You saw breasts, didn’t you?”

“The boys launched themselves onto my bed in uncontrollable laughter.

Karen continued her study of the string, then with a gasp put both hands over her mouth, turned to face me and mumbled through her fingers, “are you gonna write about…you know?” She quickly glanced at the string and back at me, her eyes wide.

“No, of course not,” I reassured her. “I would never write a story about that.”

When the kids cleared out of the room I grabbed my notebook, stuck a pen behind my ear and contemplated my options. Sunglasses? Closed eyes? Upside-down mountains? Racing airplanes? Skirted woman?

None of those inspired a “personal” story, but there was an idea rattling around ever since I first saw the string in its final position. I said I couldn’t write about it, told my daughter I wouldn’t, but should I? Do I dare?

I pulled the pen from my hair and with a schoolgirl giggle, the first sentence appeared on the page.

All the girls in the sixth grade had two bumps on their sweater, except for me.