When I Open My Mouth 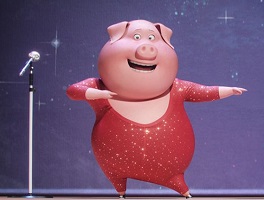 (2011) I smiled at the congregation during the thirty second musical intro of my solo as if nothing was out of the ordinary, while in fact I was opening every nook and cranny in my head searching for the words to the first verse of the song.

Hearing the notes of my entrance cue, I opened my mouth hoping the words would leap out of their hiding place, but they didn’t.

I waved at the sound guy in the back of the church to stop the music and chuckled into the microphone. “An hour ago I knew the words to this song, but now they’re playing hide and seek in my head. I do however have them at the sound booth, so please excuse me a minute.”

The congregation grinned as I scurried down the aisle, grabbed the CD case, pulled out the cover with the words and hurried back to the microphone. As I moved the printed lyrics an arms length away from my face so I could see them without my reading glasses, the sanctuary burst into laughter. Luckily, we had that half minute intro to prepare ourselves once again, for the contemplative message of the music.

After the service, people rushed over to talk to me. I assumed they would say the usual; you sing like an angel, your voice is beautiful, your music always touches me, but this time all they wanted to talk about was how much my screw-up had inspired them.

They were saying things like, “I thought you would be embarrassed, but you just laughed, then sang as if nothing had happened; that was a message in and of itself.”

I’ve experienced enough musical embarrassment to know it’s going to happen no matter how prepared I am and when it does I have two choices: I can either beat myself up or laugh. Laughing feels better.

(2013) I played Aunt March in Little Women, the Musical at New Salem’s Theatre in the Park and had a duet with Emily, who played the part of Jo March. The first two verses were my solo.

On day six of the show’s run, I opened my mouth to sing and the second verse fell out instead of the first. Emily’s eyes grew as large as the moon overhead when she realized my faux pas. I continued singing the second verse while my head screamed at me.

I waited patiently for that first word during a short interlude between verses, but my head was silent, probably off brooding somewhere, so I sang the second verse again.

When the duet was finished, the earth was still revolving, the moon was still shining down on the outdoor stage and eventually, after the audience’s rousing applause, their attention was diverted to the next scene.

After a quick apology to Emily, I headed to the green room to change costumes and get into place for my next entrance. There wasn’t time to reflect on the blunder.

(2017) Our new minister asked if I had a song that would fit the theme of his message. It just so happened that I had a delightful, upbeat song that would be perfect, but it was the last song on earth I wanted to sing.

The accompaniment CD was a strumming guitar with no melody to use as entrance cues. To make matters worse, the time signature was six beats to a measure for the verse and nine beats for the chorus. With the nonhelpful strum of the guitar during the signature changes, I regularly lost count between the verses and couldn’t find my way back into the song.

I practiced daily for two weeks. Sometimes my entrances were flawless, sometimes a flop. The last run through before leaving for church was a bomb.

“Crap,” I mumbled as I walked out of my writing/music room.

“Yes, but it’s happened how many times in your life, two? The odds are with you,” He reassured.

“You adorable man! I’ve been singing in public my whole life and you think I’ve only messed up twice. Have I told you how much I love you?”

At church, when I opened my mouth to sing, my voice sounded great. The notes were lilting in the air. People were smiling and tapping their toes when it happened. I was early, or maybe I was late, getting into the chorus. I smiled and confidently reassured the congregation, “I just missed my entrance. Give me a minute and I’ll jump back in.”

Then out of the blue I heard the chord change at the end of the chorus and leaped back into the song as if blathering while listening for my entrance was a normal every day thing.

My voice was strong. I sang the verse and chorus with assurance as if I was performing for the hundredth time at Carnegie Hall. The energy in the building was electric. The congregation and I were in the zone, heading toward the finish line together until. . . I missed another cue.

Holding an index finger into the air as I listened to the repetitious strumming, I said, “Wait a minute. I’ll find it.”

Then sure enough, another chord change and I dived immediately into the song, making it all the way to the end and topping it off with a clear, beautifully executed, high F as applause saturated the room.

After the service one friend said, “The way you gracefully and naturally said, Oops then went on with joy, allowed me to feel less self-conscious about my own singing.”  Another one said something about someday shattering glass with my high notes, which caused me to laugh nervously, wondering if I would be responsible for damages.

And then another friend spoke words that touched the core of my soul when she pulled me into a gentle hug and whispered, “When you open your mouth, God falls out.”

« The Voyage of the Mist Tent | The String Fling »