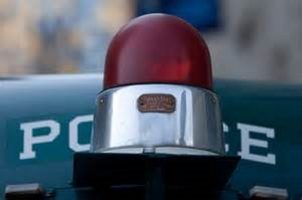 I’ve had my share of summer vacations. I’ve even written about them, but there’s one that stands out among all the rest – the time my husband was spotted allegedly throwing drugs off the Clay’s Ferry Bridge over the Kentucky River.

The weather was clear and sunny when we left Gatlinburg, Tennessee to head home after our five-day vacation. My two oldest children were unable to go with us, so it was just my teenage daughter, her friend, my husband Ron, and me in our trusty blue Jeep Cherokee heading back to the Midwest.

As we left the Great Smokey Mountains, the girls announced they needed tampons. Ron stopped at the nearest store while I gave the girls a ten-dollar bill along with instructions to buy a box of 36. When they returned they opened the package, took two tampons each to put in their purse then tossed the box in the back of the Jeep with the luggage.

After three hours on I-75, the girls were snoozing in the back seat and I had my nose in a book when Ron noticed a road sign. It wasn’t an official Interstate sign. It was made of weathered plywood on which someone had crudely painted with a household paintbrush, Vehicle Drug Search 4 Miles Ahead. Ron dismissed the sign as a practical joke and didn’t mention it to me until after the forthcoming “incident”.

Two miles later as we drove over the Kentucky River, Ron stopped the car on the shoulder of the Clay’s Ferry Bridge, which extends 250 feet above the river, and announced he was going to get a pack of gum out of his suitcase. There was a wiggly thought in the back of my mind that it was illegal to stop on a bridge, but he was already out of the vehicle before I had a chance to say anything.

The draft made by a passing semi was strong enough to shake the Jeep and wake the girls. I was glad Ron made it to the rear of the car intact, but instead of opening the hatch, he stepped over to the railing, put his hands on the back of his head, and stood there for a few moments admiring the view.

Ron is retired Navy. He loves water and travel. Stopping along the side of a road (usually back roads off the beaten path) to look at old trucks, odd buildings or a nice view is typical. I didn’t think anything of it and went back to reading.

According to Ron, there was a person in a little bitty boat on the water and he thought to himself, a fisherman! Cool.

Satisfied with his scenic pause Ron returned to the Jeep, but when he opened the hatch it was “raining tampons” (his words). He frantically tried to grab the thirty-two escaped tampons as they tumbled down the luggage and leaped like little skydivers out of the Jeep, where they rolled on the tarmac, furiously scattering with each passing semi-truck. I quickly hopped out of the Jeep and helped corral the runaways.

When all of the rebel feminine products were stuffed back in the box, I returned to the car while Ron hunted for his gum. I had just buckled my seat belt and opened my book when I heard an unfamiliar, confident male voice ask, “What are you doing?”

Spinning around in my seat I saw Ron standing motionless, his eyes wide with shock as he stared at a police officer.

He later recalled I was bent over my suitcase when I sensed something behind me. I turned to look and this cop was standing four feet away! My first thought was what the hell? Where did he come from? Did his car glide on air?

Ron opened his palm, revealing the pack of gum and respectfully answered “I was looking for my gum.”

“Did you know it’s against the law to stop on a bridge?” The officer questioned.

“What did you throw over the side of the bridge?”

“Why did you stop on the bridge?”

Panic etched Ron’s face as he hesitantly replied, “Because it had a nice view.”

The officer paused for a moment, thinking, then continued. “Two miles before the bridge is a sign about a vehicle drug search ahead. People with drugs in their vehicle, will stop on the bridge and toss them over. We have a diver below on a boat to grab whatever is dumped and a spotter in the tree line watching the bridge. The spotter radioed that you may have thrown something over.”

Ron was now alarmed, contemplating the worst. I’m not a drug runner! I’m gonna be hauled off in handcuffs! My car will be strip-searched for drugs – and so will I!

Although the scene playing out behind us was serious, the girls and I started giggling when we realized how Ron, standing at the railing and the unexpected tampon scramble, must have looked to the sentry in the trees.

Ron stood frozen, tongue-tied, so I said to the officer, “I can explain.”

Using the box of tampons as a visual aid, I explained about the emergency stop at the store, Ron’s hankering for gum and a nice view, the open box of tampons tumbling to the ground, running amok and the two of us clambering to catch them.

The girls were now squealing with laughter.

The officer smiled, shook his head, then turned to Ron and said. “Okay! I believe you. I should give you a ticket for stopping on a bridge, but it sounds like you already have your hands full with the ladies in the car. I’m going to go back to my vehicle and write a warning ticket.

“Thank you!” Ron sighed, relieved.  As a second thought, he added, “Could you make the girls stop laughing?”

When the officer returned to the Jeep with the warning citation, I took the opportunity to ask, “Has something like this ever happened before? A car stops on the bridge, but they aren’t dumping drugs, they’re just doing something normal like fetching tampons?

The officer laughed. “This is definitely a first. I’m sure this will get a good laugh when I tell them back at the station.”

The sheer silliness of the incident, coupled with the relief that Ron wasn’t going to jail, had the girls in stitches again. The officer pointed a finger at them through the back window and said, “Now girls, don’t be too hard on Mr. Kick. He’s had a rough day!”

Obviously, there was no vehicle drug search on I-75. Realistically if there had been, traffic on the Interstate would have been backed up for miles. That, and the crude sign, was probably why Ron’s subconscious dismissed the makeshift warning.

The open box of tampons was still clutched in my hand, so I handed it to my daughter.  And guess what she did? She tossed that open box, once again, into the back of the Jeep! Kids!