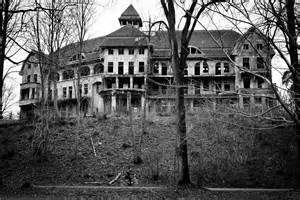 When I was married to a minister I wrote humorous stories about being a minister’s wife and what it was really like to live in the church parsonage; the house owned and controlled by the church. I regularly dreamed and wrote about moving into a house that met “my” needs.

I wanted simple things: a shower, bigger closets, central air.  Each parsonage had something on my list, but with every gain there was a loss: get a shower, lose a garage; get a closet, lose the second bathroom. I became obsessed with my plight.  I was up against a parsonage Goliath, with an empty slingshot and not even a lipstick in my pocket to hurl.

Then the nightmares began!

In one dream my family moved into a parsonage that was so large I suspected it had once been a church. The rooms were castle size, large and drafty with those old 12″ x 12″ speckled floor tiles (probably asbestos).

My first question was, “whose responsibility is it to wash and wax all these floors?”

“Yours, of course!” said the head of the parsonage committee, his face distorted as he mockingly laughed into the camera lens of my dream.

When I finally got a peek at the kitchen, it was congested with people cooking Meals-On-Wheels. The living room was lined with women bent over sewing machines making lap robes for the local nursing home.

I never saw the bedrooms. They were at the top of a rickety wooden staircase that led to the old bell tower. The first step collapsed under my weight. I woke up screaming!

Another nightmare again had old tile floors throughout the house, but the bedrooms were barely large enough for a twin bed and small dresser. Although the kitchen had been remodeled with new cabinets, the floor was uneven like a carnival fun house.

Then I saw the bathroom. It was huge! The shower, toilet, sink, vanity and floor were black and shinny. It had a built in stereo system and a Jacuzzi! I wondered if someone on the parsonage committee had a bathroom fetish.

I seriously considered living with the problems in the rest of the house, just to have that bathroom, but when I tried to maneuver my way back through the kitchen funhouse, my legs gave out. I awoke from the dream dripping in sweat!

When I realized it had just been a nightmare I was relieved, but appalled that my subconscious would consider living with the conditions of that house. Then it occurred to me! The nightmares weren’t just wild dreams, they were distorted versions of MY LIFE!

Our first parsonage had a kitchen built on a slanted old back porch. The first time I served meatballs they rolled across the plate. When the paneling in the living room was installed they nailed it over the cold air return. We were instructed to keep the door to the furnace room open at all times. The only heat in the upstairs bedroom radiated from the furnace chimney which ran through a wall of our room. I would hug that wall to warm up before leaping across the cold linoleum into bed.

In another house the washer and dryer were on the back porch off the kitchen. One day, naked after a shower except for a towel wrapped around him, my husband opened the door to the porch to toss his clothes in the washer and found a church member standing there with her hand in the air ready to knock on the door. Awkward!

Several years before we moved into our last house, the parsonage committee had two large closets built on each end of the unheated front porch to remedy the lack of closet space inside the house. The room was closed-in with eight thin storm windows. This would have been a good temporary solution if the house was located below the equator, but we lived in Illinois! During the winter months I would bundle up in my heavy coat and stocking hat to pick out clothes for the day. Burr!

When I finally stopped obsessing about my predicament, instead of a nightmare, I awoke one night with detailed plans to extend the house onto the front porch. The blueprint included a large closet in the front bedroom, storage in the living room and a foyer with a coat closet. The parsonage committee liked my design and a few months later used it to remodel the house.  I even got new carpet throughout the house!  There really is power in positive thinking!

As I recall these parsonage memories, it’s no wonder I had nightmares! But how did that shiny black bathroom with Jacuzzi and built in stereo system get into my dream?

Maybe I’m the one with the bathroom fetish!

If you or someone you know has a parsonage nightmare story, I would love to hear it.  Please share, comment or send me a personal message.