Next Stop, the Twilight Zone 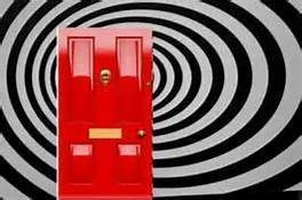 I’m one of those chipper morning people. My husband is not. One Sunday morning I read an article out loud about the people who were making money off of the public school system’s Common Core curriculum. Ron responded with a negative comment, compelling me (as usual) to counter with a positive one until we were in a heated debate over a topic neither of us knew much about.

My happy mood was ruined, which pissed me off, propelling me into power cleaning mode. The kitchen counter was littered with his papers: bowling score sheets, Hyundai service coupons, random notes on the back of envelopes. The clutter irritated me like gnats on fruit. I pitched the things I knew he wouldn’t miss and stacked the rest in a neat pile.

Next on my radar was the slew of refrigerator magnets. Into the trash they went along with the F. A. S. T. magnet with instructions on how to identify a stroke. I considered putting it back on the fridge, but what were the odds either of us would remember we had it? I left it in the trash embedded in leftover oatmeal.

The next day I was back to my cheerful self as I headed to work. Late that afternoon a coworker turned on some tunes and started clogging – at least that’s what she called it. Her dancing reminded me of the time my maternal grandfather threw a string of fire crackers under my mother’s feet as she hung towels on the clothesline, but who am I to judge?

I joined in on the fun by tap dancing through the reception area then turned the corner into the short hallway leading to another office. The other two staffers said that from their viewpoint it looked like I had “vanished” through the wall, which reminded me of a story that begged to be told.

When I was 9 years old my sister and I watched a Twilight Zone episode about a little girl that fell out of bed and vanished through her bedroom wall into another dimension. I can still recall her eerie disembodied cries echoing from the beyond.

My father, like my grandfather, had not considered the consequences when (from our viewpoint) he leaned up against the wall and disappeared into the Twilight Zone. Hearing our screams he rushed back into the living room and explained his trick, eventually convincing us that our house DID NOT have a portal into another dimension!

As I told this story I stood at the entrance to the hall leading to the office and mimicked my father’s prank. I put my left arm in the air near the  hall and pretended to lean on the wall.  Then with a shocked facial expression I “fell” into the Twilight Zone.

Unfortunately I lost my balance, picked up speed, slammed both forearms into the office door frame and landed inside the office, stretched out flat on my stomach, arms down at my side, with my right cheek bone embedded into the carpet. Ugh! 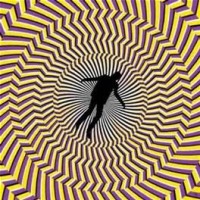 My head buzzed. I was dazed, but alert as I gazed at the diagonal lines on the wallpaper wondering if I had actually “fallen” into the Twilight Zone!

I could hear belly laughs coming from the reception area, but when I didn’t show up for curtain call they grew silent.

“Are you okay?” they asked.

The ridiculousness of the incident started me giggling. When my co-workers helped me up I was in full laughing mode, which started them howling. My glasses were found ten feet from my landing site, one earpiece straight out to the side – more laughter.

My plan was to immediately get my glasses fixed, but my co-workers insisted I not drive so I called Ron. Have you noticed how laughing and crying sound similar? He thought I was sobbing, drove to my office and rushed me to Prompt Care.

Concerned I had a concussion he kept a watchful eye on me as we waited for the doctor. I tried to stop laughing, but occasionally an unleashed giggle would snort through my nose. Was I laughing? Was I crying? It was hard to tell.

“How did you fall?” the doctor queried.

It was the truth. I had been standing (well leaning) and then I was on the floor. It wasn’t until the next day looking at the bruises on my forearms that I put the pieces together.

“Did you pass out before you fell?”

“Did you have pain before you fell?”

This guy was annoyingly persistent. “I was dancing,” I finally confessed.

I explained about the clogging which started the whole thing, the tap dancing, the Twilight Zone episode, my father’s hoax and my “stumbling” attempt to demonstrate, which I acted out for the doctor as best I could while remaining seated.

After a thorough exam and a few x-rays it was determined that I was more embarrassed than hurt. That’s when Ron asked the big question.

“What symptoms should I watch for this evening in case she has a concussion?

Ron’s face brightened and then he announced, “We have that on a magnet!”

I pictured the magnet nestled in yesterday’s cold breakfast along with Ron’s stuff. It bothered me that I had pitched his things without asking, even though I knew he really wouldn’t care. But there was more…

One of the many Twilight Zone themes is that the main character discovers an ugly truth about their nature. I’d had a revelation yesterday as I cleaned and pitched. It was that I have an annoying compulsion to argue the positive side of anything – even if there isn’t one. I was the one that started the debate, tossing out my good mood the moment I opened my mouth for the rebuttal.  Oh the horror of the truth!

I wasn’t ready to confess so after we got home, during the short time it took Ron to get the mail and shut the garage door, I hurried into the kitchen, dug through the trash, grabbed the magnet, washed off the oatmeal and quickly slapped it back on the front door of the fridge. My secret was safe!

Well, it WAS safe – until now!

You’re traveling through another dimension, a dimension not only of sight and sound but of mind; a journey into a wondrous land whose boundaries are that of imagination. That’s the signpost up ahead – your next stop, the Twilight Zone. (Rod Serling)

« Something I’m Eating Is Making Me Sick | Home Sweet Home? »