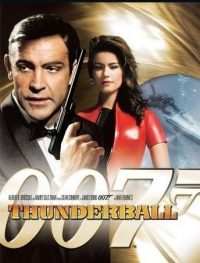 When I woke up on Thanksgiving Day Mom had been in the kitchen since the crack of dawn, fussing over the Butterball Turkey for its noon debut on our dining room table.

Dad had just returned from picking up Grandma. My older sister Melody (14) was sitting at her vanity table trying to style her hair after substituting frozen orange juice cans for hair curlers. My contagious sister Julie (6), her neck swollen with the mumps, was on the sofa watching a Thanksgiving Day Parade. I was 12, hiding out in my bedroom, wrestling with a big secret.

The plan for after dinner was for Grandma to stay home with Julie while the rest of the family went to see the James Bond movie Thunderball.

Dad was an avid reader of Bond books. The year before, he took us to see Goldfinger. I was mesmerized by the movie. I can still hear Shirley Bassie’s powerful voice singing the movie’s theme song: Gold-fing-ah. He’s the man, the man with the Midas touch. A spidah’s touch, which always reminds me of the scene with the woman covered from head to toe in gold paint, lying across Bond’s bed, dead, from skin suffocation. I’m still fascinated by that sight.

My favorite scene was when James is snooping underneath a gigantic model of Fort Knox. He’s standing on a chair with his head inside the rendering of the Bullion Depository building listening to Goldfinger discuss his plan to rob the place, when the movie camera pans up the back of his legs and my mom says out loud, “Look at the crease in his trousers! He’s been wearing that same suit for three days and it isn’t even wrinkled!”

I desperately wanted to see the Thunderball that afternoon. I loved Sean Connery as James Bond, wrinkled or freshly pressed, but when I got up that morning the right side of my neck hurt. I prayed it was just a sore throat, but throughout the morning as the turkey was turning a golden brown in the oven, my neck was turning puffy and painful in the bedroom. I had the mumps!

With Mom’s ability to zoom in on something as small as a trouser crease, she was sure to notice my swollen neck if I went anywhere near the kitchen. I knew it wasn’t right to keep quiet, but what would be worse was the family going to see Thunderball without me like the time Mom took my sisters to see a Haley Mills movie while I was away from home, innocently singing Kumbaya at church camp!

Riddled with guilt for not revealing my condition, I came up with an idea. I could appease my conscience by telling Grandma. I had once overheard her say she would never blab something told to her in confidence.

I opened my bedroom door and poked my head into the hall. Grandma was in the living room sitting in dad’s recliner. Julie, the infectious, was still on the sofa. Melody was in the kitchen asking Mom to save bigger tin cans.

As I passed the kitchen, I kept my eyes focused on my destination. I didn’t want to risk so much as a glance into the kitchen for fear that Mom would spot me.

“Can I tell you something Grandma?” I asked kneeling down beside her.

“Of course you can. You can tell me anything.”

Trying to be as quiet as possible I leaned in, getting so close to her that her hair tickled my nose when I whispered, “I think I have the mumps, but I really want to go to the movie today, so don’t tell Mom, okay?” I headed back to my room, thinking all was well.

I’d just sat down on my bed when Mom rushed in, stuck a thermometer in my mouth and poked at my neck. “Ow!” Grandma, the snitch, stood in the doorway mouthing, “I’m sorry”.

“Honey, you have the mumps and a fever,” Mom explained. “But don’t worry. We’re not going to the movie until you’re better. I promise.”

Clearly, the You Went To See A Hayley Mills Movie Without Me? sobbing episode from two years ago was still fresh in her mind. [Side note: While writing this story I asked mom if she remembered taking my sisters to a movie while I was at camp. Her response was, “Are you still upset about that?]

I settled on the sofa next to my sister. She was happy to have the company, but neither of us felt well enough to eat anything other than Jello.

Julie went back to school a week later. I had the sofa to myself for one day when she came home from school with the measles. Poor Julie! Ten days after Thanksgiving, when I was no longer contagious, we went to see Thunderball without her.