House of Many Colors 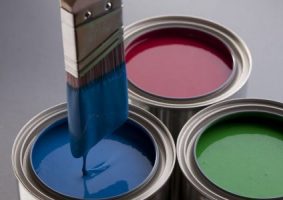 Nine years ago we bought a bigger house. Ron said the walls were white.  I said they were cream.

“Cream is just another way to say white, ” he claimed.

I held a sheet of white copy paper to the wall to show him the subtle difference. He smiled. “White. Cream. Whatever you want to call it, Gaye, the walls are still boring.”

He was absolutely right. We needed to paint.

The new home had a vaulted ceiling in the kitchen/living room. The thought of climbing up and down a ladder to paint those walls made my knees ache. I had no idea what wall color to choose, so when Ron suggested, “Let’s get settled in first. Maybe paint next year.” I thought that was a great idea! When in doubt, procrastinate.

The next year came and went, so did the eight years after that. I wanted a mid-range neutral color on all the walls in the house. Not too dark, but not as light as cream. Something that would say “color” but not scream “COLOR“.

I was also toying with a mid-range accent wall in a room or two. Paint chips were wedged behind every outlet cover in the kitchen. One outlet held shades of blue, one green and another neutrals. Nine years, and I still couldn’t make up my mind what color I wanted the walls. On the up side, my outlets looked like peacocks.

By the time 2017 rolled around Ron and I were both retired. I wasn’t as concerned about my knees hurting from painting those vaulted ceiling walls, as I was about falling off the ladder; my body crumpled  on the floor covered in a colorful pool of Bleached Blue, Almond Brittle or Stash O’ Pistachio paint.

We’d been nonchalantly talking about selling the house for a couple of years. Downsizing. Getting something more manageable. The house was way too big for us. I didn’t want to clean it when I was working. Why would I want to spend my retirement cleaning?

Then I had a thought! What if we bought a house that had recently been painted? I was giddy with “not picking paint” anticipation. I found a house online that had more color on the walls than I really wanted, but I was intrigued.

Yikes! One bedroom had two walls painted navy blue and two walls orange. The garage, which was beige, had a 4 inch orange soffit along the ceiling on the back wall. The living room was orange, the kitchen was green with orange window valances and the master bath and bedroom each had a navy blue accent wall.

On the opposite spectrum the sun room had a beautiful deep plum accent wall on which my gold framed art work would look fabulous! The gray and white guest bathroom, with it’s white vanity and black counter top, was stunning. The laundry room was a light yellow. The rest of the house was Almond Brittle, my favorite neutral peacock paint chip.

We both liked the floor plan. Although the house was an explosion of color, a bit much for my taste, I was inspired by the owner’s courage to decorate their walls with such vibrant hues.  It said a lot about their personality.

What did our walls say about us? Bland, careful, boring, indecisive?  We definitely needed more color on our walls to accurately reflect our charm.

We talked seriously about making an offer on the house, but after a good night’s sleep we woke in a state of panic. If we submitted an offer it would set into motion months of stress getting our house ready to sell, open houses, showings, inspections, downsizing, packing, moving. NOOOOO! I hated the idea of moving even more than painting 12 foot walls.

“Maybe we’re just bored with our walls,” I said. “We need to paint! We can hire someone to do the vaulted ceiling rooms. While we’re at it, let’s upgrade our kitchen counter top and buy a new sink.”

It didn’t take long to discover two enormous flaws in this grand plan. It was EXPENSIVE and now, as well as picking paint, I had to pick a counter top: granite? quartz? marble? And a sink: stainless-steel? porcelain? composite? I was sinking in a sea of choices, costly ones.

Why put more money into a house that we keep talking about selling? We were NOT going through with this plan.

A month later, Ron woke up in the middle of the night to find me hunkered over the computer looking at the House of Many Colors. He had been thinking about it too. It was still on the market. Photos revealed the living room was no longer orange, but a lovely, easy on the eyes light yellow, like the laundry room.

“We can always paint the blue and orange room,” I declared. “In fact, ALL the walls could be painted without even climbing a ladder.”

We took another walk through the house and made an offer the same day.

I don’t know if it was the nine years of pent up painting energy or the lower ceilings, but we moved into the new house in July and in September spent six days painting everything but the blue/orange bedroom. That will be a Fall project.

The navy blue accent walls in the bedroom and bath are now Almond Brittle to match the walls. The room I use for writing, which was already that color, has been refreshed with a new coat. And instead of just painting the orange soffit in the garage to match the beige walls, we painted the whole garage white, because according to Ron a working garage needs to reflect light.

My mother loved our new home. As she was leaving she turned back to look at the kitchen one more time. “If I were to change anything,” she offered. “It would be the kitchen. It’s a lot of green.”

She was right. It WAS a lot of bold, deep lime green called Jungle Floor. I would never have been brave enough to pick a color like that and put it in an entire room, but there it was with all its vibrant energy, in MY kitchen.

“You know what mom?” I said, a satisfied smile crossing my face. “I like it. I need more color like this in my life.”

« Refrigeration Exploration | Something Sinister Is Afoot (or maybe not) »